I don’t go to the mall enough to remember the layout. The mall is not like a grocery store or a bookstore. Normally, I just roam up and down the aisles until I find what I need. But in a mall, roaming could cause my mother to file a missing persons’ report, because after 48 hours, I would be in some corner of Macy’s, in extraordinary distress, eating the last of my Annie’s pretzel and praying to find the nearest exit. After several attempts and wanders through the perfume department, I might just die there, of starvation, anxiety and navigational heart failure.

That is why, in the mall, it is always helpful to have a map. It might be the small-print, barely-readable print-at-home map, the giant, colorful barrier at the entryway filled with fingerprints map, or the little brochure you can pick up at the “Visitor’s Center,” (that is, if you can find it) map. Regardless of the type, I am a firm believer that maps are vital when planning a trip to the mall.

So I was extremely happy to find a map in my visitor’s packet during my trip to “Church of the Resurrection” last Sunday. “Thank God,” I thought to myself. “Now I can figure out where are the nearest restrooms and find out if there is a ‘Banana Republic’.” There were also signs with arrows and people with giant, metallic nametags at every corner to guide us. It was bright, but not florescent, warm but not muggy and big, but not impassable. In fact, “Church of the Resurrection” is the nicest, most convenient mall I have ever visited.

When we entered the sanctuary, we realized we were not in a mall, but a venue. Flip-seats with good legroom, stadium design, non-smoking, really a great place to see a concert. Where’s my ticket, again? Oh, wait, this is a church? I’m sorry, the giant stage flanked by two giant screens and the mood lighting confused me.

It wasn’t until the service started that I fully believed I was at some sort of religious gathering. Finally, a robed minister and choir put me at ease and I relaxed into my comfortable seat, arm rests included. There was no order-of-worship, which would normally really bug me, but my heart told me to trust the big-screens, “They will show you the way.”

Throughout the service I experienced a dichotomy of feelings. One moment, I was calm, listening to a beautiful choir that I could actually hear due to the fabulous sound system. The next minute, I was tense, as images of Jesus flashed on the big screens and I thought that perhaps I was about to watch an MTV documentary about modern Christianity. During the head-pastor’s sermon, I was reminded of a young, handsome geology professor I had at Oberlin. His voice, so soothing that despite his interesting content, I often went to sleep. I always awakened at a key point in the lecture, feeling the urge to raise my hand in the giant auditorium classroom and ask a question.

Prophet Hamilton’s sermon was much like a large, undergraduate lecture class. Simple enough to avoid assumption of students’ knowledge but scholarly enough to be interesting. I could tell that his intelligence and charisma attracted more than people’s attention, but their overwhelming praise. Even I thought he was a bit prophetic. To build an empire such as this, he had to either be a prophet or an extremely sharp salesman. Perhaps it is the latter. Perhaps they are one in the same.

Nevertheless, when he showed a non-funny but related clip from “The Daily Show” near the end of his sermon, I knew that it was only my great cynicism and prepared doubt that forced me to resist his spell. Otherwise, I would have left that building a contemporary, conservative Methodist.

Communion completed the service after the sermon, which was executed with the perfection of tradition I would only expect from Catholics. First, an usher came to our row. Next, he put a bit of foamy hand-sanitizer on our hands. Last, intinction in “unfermented” wine (because I’m sure they had refrigerators in Jesus’ day) and back to our seats for the postlude. Usually, I expect real spiritual experiences to be slow and gripping. . It was surprising how the service seemed both quick and meaningful.

We left the dim, cozy-huge sanctuary and returned to the mall. It was then that I fully realized this metaphor. Screaming children, slow-moving shoppers, coffee shop, gift shop, visitor’s center, and that was just the foyer. What was beyond the main room, the main building, remains a mystery to me. If I ever want to find out, I can always just look at my map.

We stayed there a bit and I took pictures while my mom waited for a friend. As I watched the hustle and bustle of one service ending and another beginning, I began to understand the appeal. Just like the mall, it was my mom and I in a giant crowd of people with the same general intention: to go to church. It didn’t matter who we were or where we were on life’s journey (as my former church used to preach), we were welcome because no one took notice of who entered and exited the building. It is hard to be exclusive with so many already present. And that, in a way, is comforting. Anonymity and semi-good worship could come in handy at the most stressful of times. I could come here and disappear in the luxurious concert-hall and comfortable chairs. I could drink coffee, listen to good music and relax at the sound and site of a good-looking pastor. I could always sanitize my hands before communion to assure no negative, germy connection at Christ’s table.

But then it would be just about me, wouldn’t it? 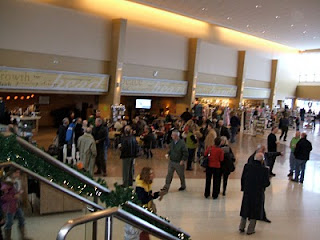 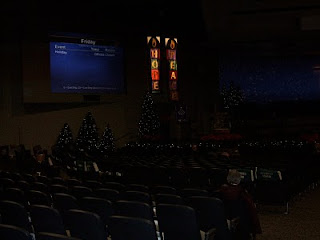 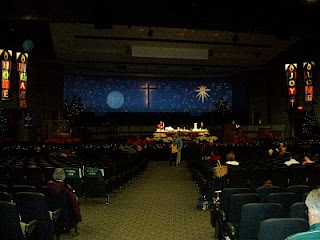 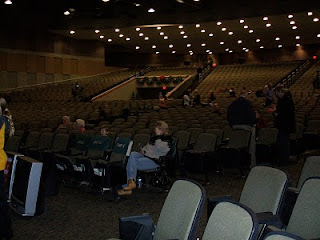 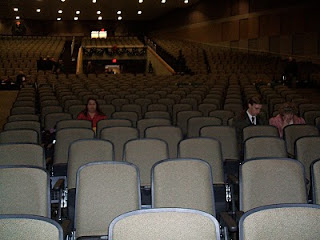 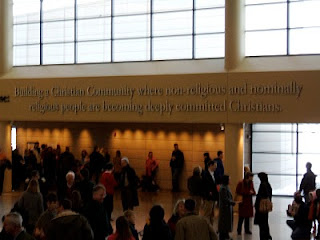 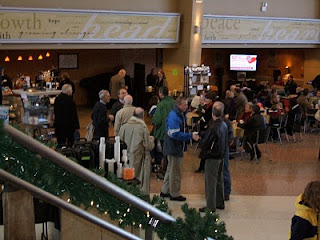