Halfway through the service the man sitting in the front pew, about six rows ahead of us, turned around.

My right hand darted to my face and I covered my peripheral vision on that side. Too late. My stomach was shaking with the hilarious truth. And though I had shielded my eyes, I could hear my mom’s muffled laughter over the electric keyboardist in the midst of a C-Major improvisation. That was the moment when my analytical brain checked-out and my immaturity checked-in. That was also the turning point, after nearly an hour of oddness, when, what I had mostly classified as “weird” and “uncomfortable,” became completely and utterly ridiculous.

After enjoying my first Assemblies of God experience so much, I not only gave this church the benefit of the doubt, but also had some standard expectations: good music, consistent conservative theology and a genuine atmosphere of welcome. I recognized quickly that we were not in a giant protestant service like the week before, or even a large Assemblies of God experience like two weeks prior. We were back to the convenient, commercialized good ole contemporary mega-church, complete with multiple service times and locations, several dining options and a gift shop.

Still, though, after enjoying a couple mega-churches already, I have started to enter these places of worship with less cynicism and more hope. I really wanted to like that service. Scathing blog entries are harder for me to write than pieces abut intense religion and spirituality. Even after I knew that this would not be anything like Lenexa Christian AG, I looked forward to a new, thought-provoking experience at Sheffield Family Life AG.

It only took ten minutes for my hopefulness to melt away into eye-rolls and watch-checks. First, the music was repetitive, boring and thoughtless. “He is awesome, He is glorious, God is so cool, blah, blah, blah.” The musicians, though talented, couldn’t save the three-chord disaster. Then, under the lyrics on the big screens, little notices popped up: “Blue Toyota, Missouri plates, lights on,” “Set of keys found in lobby with WWJD keychain,” or “Red Honda, Kansas plates, doors open and parked in grass.” Seriously? Am I at a football game?

I appreciate an every-once-in-a-while spirit-led service. In fact, one of my most memorable spiritual experiences was at Peace Community Church in Oberlin, when instead of a sermon, we had a laying on of hands for a friend struggling to change lives in Guatemala. In the current situation, though, the spirit-led seemed pastor-planned, when the sermon was replaced with a spur-of-the-moment, 30-minute altar call. People prayed and wept, hugged each other and raised their hands toward the ceiling. I know it is self-righteous and elitist of me to doubt these churchgoers’ prayers, but I felt like I was in a movie. Everything seemed scripted and ultimately fictional. There was a middle-aged man bent over on the floor for the altar call and remainder of the service with his rear-end up in the air but his knees not quite touching the ground. It was like a comedic metaphor: “Please, someone come and kick my ass.”

We were mid-altar call when it happened. When an innocent guy in the front row turned around to scan the pews. And I swear this with my mother’s support, but that man who glanced at us WAS the Emerald City Gatekeeper from the “Wizard of Oz.” The unfortunate and awesome thing about having the same sense of humor as my mother, is we both saw the Frank Morgan look-alike in the exact same moment, not able to control our simultaneous reaction. For at least ten minutes, we laughed so hard that tears streamed down our faces. I bent over and rested my forehead on the pew in front of me, covering my face with my hands and shaking. My mom sat-up straight and made several failed attempts to stop giggling. At one point, a woman sitting behind her thought she was crying and asked if she would like to go to the altar and pray. Barely able to speak, she uttered “No, thank-you,” and continued laughing, partially out of situational embarrassment.

Then, the ridiculousness became obvious. The service ended without closing or benediction and as we left, we saw the fictional man at least three more times in the lobby and parking lot. I still look back on the experience with a smile and a snicker. I wonder, “Was that for real?” “Seriously, did that really happen in real life?” And, “Am I horrible person for finding it obnoxiously hilarious?” Answers: Yes, yes, and yes…but it was totally worth it. 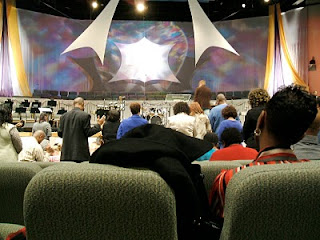 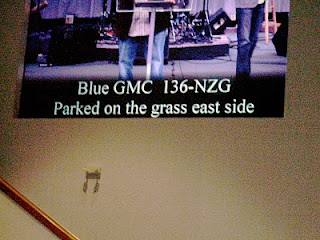 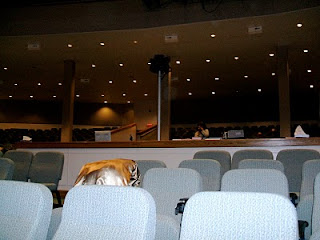 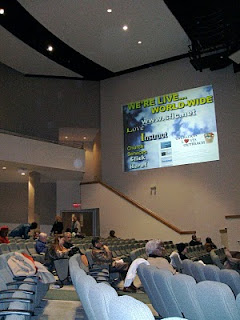 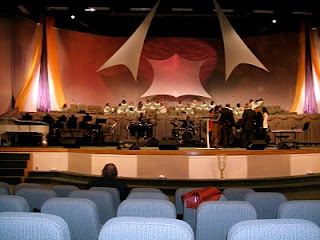