Jesus rises from the dead,
To Angels, Mary cried and pled.
She found him later, down the way,
What was she supposed to say?
The story seems weird enough,
But then two disciples have it rough.
They walk in loneliness, but are unaware,
That Jesus is standing right there.
So we have a dead guy, basically walking,
Seemingly living and definitely talking,
And sometime somewhere someone thought it funny,
To add to dead man walking, a colorful, magical bunny,
The bunny has eggs, that he acquired from a hen,
But somehow they’re colored first by the family within,
Then the family goes to church and listens to the story,
While the Easter Bunny is spreading colored-egg glory,
For candy and treats, the children all beg,
For after finding Jesus, they find an Easter Egg,
And somehow it’s all connected, not sure what it’s about.
But one thing I know is, Easter has always freaked me out.


The Virgin Birth, I can handle. The only thing unusual or unbelievable about that is the lack of...you know. A woman being pregnant, having a baby, even in a stable, is plausible. But there is nothing about a dead man walking that is realistic. I’m even open-minded to spirits and ghosts, signs from God and all that supernatural stuff. I have never been able to handle, though, the fact that he just got up, folded up his tomb blankets (what a nice guest), pushed aside a very heavy rock and just walked away.

Of course, I’ve tried to contemporize the story. I’ve studied it academically and come up with a logical answer: it’s all one giant metaphor. After a couple days of mourning, the disciples asked themselves, “What would Jesus do?” and headed out to spread the good news. His ideas were resurrected. His body, however, was not.

But even that explanation isn’t particularly fulfilling. Without the magic, the bible turns into a self-help book rather than a holy experience. Pushing the science aside, I focused on my faith. Though I believe religion and science actually function well together, in this case, maybe I needed to relax into following the doctrine blindly and without question. What if I just decided it was all true?

The barrier then, is, even if I believe, even if I know that it all really happened exactly the way it was written, I’m still not that impressed. Jesus still did his best work before he died. The resurrection was what made him famous, holy, and worshipped. It is, for some, the entire reasoning behind the Christian faith.

Jesus was born under supernatural circumstances, died, and then came back. Easter forces us to act as if there were nothing in between. I always think, what if Jesus had lived another month, another year? What could he have done? How many lives would have been saved? How many injustices would have been addressed? Great, you came back to life after you died and then ascended into heaven. That really isn’t helpful to the millions of children living in poverty or the victims of genocide. That won’t create peace or pass a health care bill. But it does do wonders for your reputation.

After writing the previous paragraphs, and the obnoxious poem, I realized that Easter makes me bitter. Every year, I am moved by Ash Wednesday and relate to the sorrow of the Lenten season. The actual finale, though, seems self-serving. Unlike Advent, which truly focuses on the miracle of life, hope and love, Easter really is all about death. For without death, Jesus couldn’t have risen from anything in the first place.

As I sat in the sanctuary at Grace and Holy Trinity, a beautiful Episcopal Cathedral in downtown Kansas City, I saw the light and the flowers and was not particularly renewed. A life that revolves around the school year doesn’t allow renewal during March and/or April. Maybe a little Spring Break, but otherwise, testing, frustration, stress, and the wildness of the warm weather. It is usually the time of year I start thinking, “Oh my gosh, I don’t know if I can make it through the last quarter.”

I’m also not a big fan of the sun or warm weather. Oberlin transformed me into an inside girl, and I flourish in the dark, cold, dampness of winter. When I need a break, I often close my blinds, turn off the lights, and blast the air conditioner. The snow and the rain seem to wash away my troubles and that is when I feel most renewed. On December 25th there is potential, great potential for a baby born out of wedlock. On Easter, there is a middle-age dead man walking around tricking people. I’m just not a fan.

So I’m putting Church #22 behind me and starting a new journey. I’m forcing myself to try something new, even though I do not feel that sense of renewal. I’m hoping, during these 50 days of Easter, that I can find that personal connection many people feel to the holiday. Perhaps by the end of this journey, I can reconcile my faith. 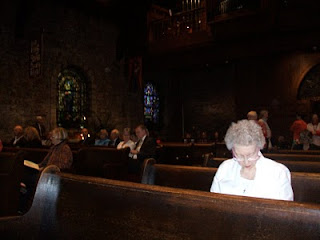 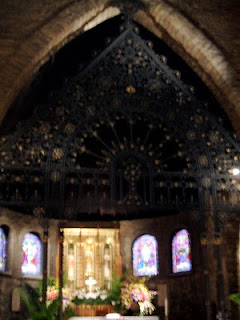 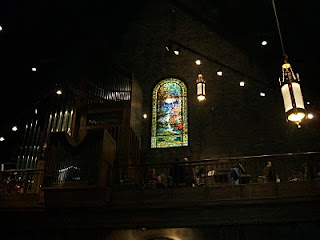 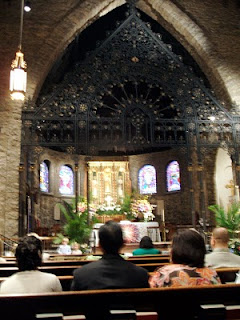 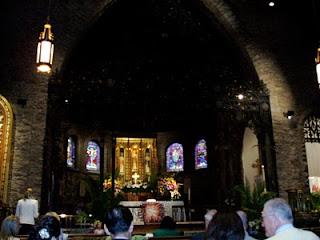