As I drifted to sleep on Saturday, April 6, my efforts were interrupted by intense stomach pain. “Crap,” I sighed and curled into the fetal position. That’s what I get for drinking a champagne bottle’s worth of mimosas and watching The Good Wife for 12 hours.

I was sure that the stomach pains were a logical consequence of my day-of-me, and dragged myself to school on Sunday, blaming a bad tuna sandwich and, let’s face it, way too much champagne. Monday, I still scolded myself but admitted that God’s punishment had gone a little too far. By Tuesday, I could barely stand-up (or keep food and water down), so I called in sick and wallowed in bed for three days.

Fever dreams are the worst. In normal dreams, you are most often yourself, with some oddities, but regular strengths and weaknesses. Bad things happen, but you fight back. In fever dreams, you are just there, as weak and sick as you feel in real life, and terrible events transpire around you. Terribly weird events, that you can’t control, react to, or run from. Vacations with parents get cancelled when your Dad falls off of a boat into the icy (icy?) Strait of Gibraltar and gets dragged to his death by a giant spider crab (seriously?) and all you can do is sit by the railing and exclaim, weakly, “I think I see a dolphin.” Weird. Shit.

So, I awoke on Thursday, determined to get out of my funk and celebrate my goddamn birthday. I emailed everyone letting them know the party was still on, albeit limited by my lack of ability to eat or drink, and wandered around the apartment for an hour before remembering that I needed to get dressed.

I love birthdays, because it’s a time of year when I get to step back and watch people I love enjoy themselves, and I get to feel kind of responsible for that. We had teppanyaki and sushi for dinner before heading to my place to play Wii and partake in some adultish beverages. I was able to eat, play Wii some, and drink water, so I considered the evening a success.

No birthday will ever top 1990 (memorialized in the above video), when my 2-year-old brother could not stop singing Happy Birthday to me and I celebrated at three parties with friends, parents, an adorable little brother, a great grandparent, and all of my grandparents (including those no longer with us). But every year I am humbled and amazed that people, these people, family and friends, not only put up with me for 365 days, but actually commemorate my existence on one of them.

And I feel lucky, and blessed, and all those other gooey feelings people get on birthdays.

The Marriage of Religion and Government


Free expression of religion is everywhere in Egypt. Women are veiled, differently according to their personal preferences and beliefs. The Call to Prayer echoes from multiple minarets, five times daily. People stop on sidewalks, in restaurants and even on airplanes to pray facing Mecca. The Egyptian people are free to celebrate and practice their religion openly, as long as they are Muslim.

Living in a religiously dominated country has altered my views on religion significantly. Whereas before I accepted the historic precedent that religion would affect political process, now I am almost adamant that it is unnecessary. I used to belong to a liberal church with a duty to combat the conservative Christian influence on American government, and now I lean toward churches and religious groups steering clear of policy completely. Part of me, perhaps, is starting to think they have little reason to exist at all outside of personal growth and moralistic reasoning.

When governments become obsessed with doing God’s will, other things fall from priority. In Egypt, tourism, the economy, and jobs seem less important than the discussion of whether or not women should be forced to wear veils in a certain way/at all. In America, keeping two loving people from getting married is higher on the to-do list than ending poverty.

But the argument stands that government’s job is to do the will of the people and if the will of the people is religiously biased, then so be it. I argue that it’s not always government’s job to promote the will of the people. Sometimes, the majority is oppressive and wrong. Sometimes, the people may be temporarily blinded by religion and it’s up to the smarter, wiser folks in power to research and investigate and steer the country in the correct direction. Slavery, discrimination, oppression, all worldwide issues that at one time may have had majority support in many countries. Just because the crowd, the majority at the time, dictates that it’s okay to burn a Coptic Cathedral, doesn’t mean the government should put up with it.

I know there are many ways to argue with this. I am arguing with myself right now. Do not our standards of right and wrong come from a religious place most of the time? Weren’t abolitionists and those who fought to preserve slavery doing so on religious arguments? I just wonder what would happen if religion were taken out of the equation completely. Would society crumble or would we see the beginning of a new era, one in which politics and religion could be kept separately while still respecting individual religious beliefs? I honestly don’t know what the answer is, but I do know I am tired of having my personal life, both here in Egypt and in America, dictated by someone else’s doctrine.
Posted by Unknown at Saturday, April 13, 2013 1 comment:

I’ve been so busy.

Don’t you love it when people say that? Like you are the only person with things to do.

I don’t have time.

Another winner. How about those two hours you spent watching Harlem Shake videos, huh? You seemed to have time for that.

I can’t think of anything interesting to write.

I’m writing now, okay, so let’s just put the past behind us. Yes, it has been more than three months since my last entry, but in these three eventful months I have experienced enough expat ups and downs to provide entries until summer. So sit back, relax, and enjoy my drama…ahem…experience.

December 21-30, 2012: Israel & Palestine
We spent nine days driving through Israel and Palestine, including Bethlehem, Nazareth and Jericho. I swam in the healing Dead Sea and sailed on the Sea of Galilee. I walked where Jesus walked, which led me to the conclusion that Jesus was in incredible shape. This experience both questioned and strengthened my faith, a process that would continue for months. It wasn’t a bad place to be when my dog died near the end of the trip. Israel is a beautiful country and I would go back in a heartbeat.

December 30, 2012-January 7, 2013: Turkey
After Israel, my friends, Justine & Chris, and I headed to Turkey. We spent a relaxing four days in Istanbul and Cappadocia respectively. I climbed through cave dwellings and toured the Bosphorus Strait by boat. On our last day, it snowed, which made it all the more difficult to return to Cairo.

January 8-February 1, 2013: Back in Cairo
I started running, working my way up to 4K, four times per week. I felt healthy and fit, while still eating pretty much whatever I wanted. I celebrated my friend, Angela’s, engagement and became more discouraged at work. I couldn’t wait for my brother’s visit.

February 2-March 1, 2013: Tavy in Egypt
Having my little brother, Tavis, in Egypt for a month was a huge blessing. He helped me with concerts, housework and was a supportive companion during a rough time. We visited historical sites that I hadn’t had a chance to see: the Pyramids of Giza, a different part of Saqqara, Coptic Cairo and the Citadel. On our first horseback trip, I was kicked by a horse, bruising up my leg and halting my running for a while. I fell out of favor with a good friend and Tav was right there to help me get through it. He took care of me when I was home with pink-eye for two days. We shared a room and he was never a bother. I miss him. 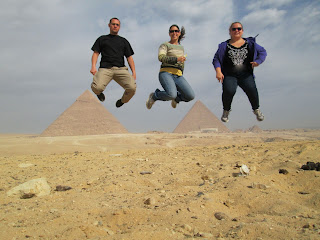 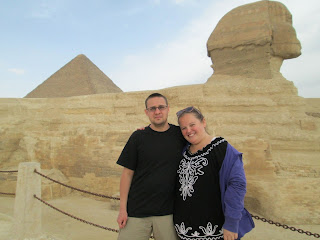 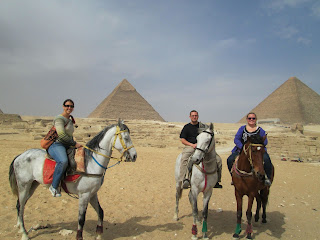 March 2-March 28: Living with an Injury
One day after Tav left, as Angela and I walked the streets of a hip neighborhood called Zamalek, I tripped while walking off a curb and rolled my ankle. I tried to recover quickly, but the pain intensified and I ended up in a shady Cairo emergency room where the doctor was at first convinced it was a fracture. The X-rays proved different, and he put a plaster slab on it as a bad sprain. I’d sprained my ankle before and never felt this kind of pain. I was confined to crutches for two days until I could see a specialist nearer to my home. Angela took care of me and we both had to miss Beth’s birthday because of it. I felt very lucky to have Angela there at that time. I struggled through work and finally saw a specialist, who helped me get an air cast delivered to my apartment. This allowed me to limp, very slowly, and I no longer needed the crutches. I was in extraordinary amounts of pain and I started to appreciate American doctors’ affinity for prescribing narcotic painkillers, while also regretting I was in Egypt. My preschoolers and first graders performed concerts, I took one day off, and wallowed through March unable to exercise, dive or walk at a normal speed. Once the specialist was able to view the ankle and the X-rays, he diagnosed a major sprain with a ruptured ligament. He kept saying, “You’re going to wish you would have just broken it.” It was (and still is) hugely frustrating. But, I did get in a trip to Alexandria to celebrate Angela’s birthday. We relaxed, saw the amazing library and hung-out on the Mediterranean.

March 29-April 5: London & Amsterdam
My ankle has improved and with the cast, I can walk normally, albeit a bit slowly. I spent Spring Break in London & Amsterdam, first visiting my friends, Sarah & Dave in London. Then, Sarah and I traveled onto Amsterdam for a little vacation. I saw two great shows and enjoyed being in Western cities. Small modern conveniences turn into huge luxuries after living in Egypt for a while.

Now, I’m just trying to get through the last term here without completely falling apart. I co-music direct the all-school musical, specifically coaching the principle roles in their solos. I’m enjoying this immensely and missing my own performing a bit. I’m only wearing the air-cast to and from work, switching to an ankle brace during the school day. The first day was rough, but today is going much better. Living and working abroad is difficult, and it’s hard to tell sometimes if it’s just living abroad or more specific to my job and location. I do know that at some point, I have to become a stronger person because of this. I’m just waiting for that to happen.

I plan to write more often. I need to write more often. And not sugarcoated adventures or prolonged emotional rants, but a balance between awe and honesty. That way it will be therapeutic for me and still fun for you. As my views on religion, privilege and ethics shift, I hope to do a better job of exploring those inner dialogs here. Because, if not on the internet, then where?